Tongue scraping uses a tool to gently remove bacteria from your tongue for improved oral health. Find out what a dentist and dental hygienist had to say about the benefits of tongue scraping.

If you’ve ever noticed a weird coating on your tongue or felt like you couldn’t get the taste of a food out of your mouth, even after brushing, you already have some awareness of your oral health beyond the requisite teeth-brushing. But chances are, you could be skipping one major step in your oral hygiene routine: tongue scraping.

“Many folks, even with great oral hygiene, neglect their tongues,” says Chris Salierno, DDS, Chief Dental Officer at tend. Your tongue actually deserves just as much attention as you give to brushing your teeth and flossing daily. That’s where tongue scraping comes in.

Tongue scraping has been around for years, but a new wave of stylish-looking tongue scrapers and a surge of interest in tongue scraping from influencers and celebs have put it back into the spotlight.

I’m always on the lookout for easy, low-effort ways to upgrade my health, so I decided to give it a try. Learn more about the science behind this practice, the potential benefits of tongue scraping, and my results after two weeks of tongue scraping.

What is Tongue Scraping?

Tongue scraping involves using a special tool to remove the bacteria and tiny pieces of food from the surface of your tongue. Basically, it’s dermaplaning for oral health. 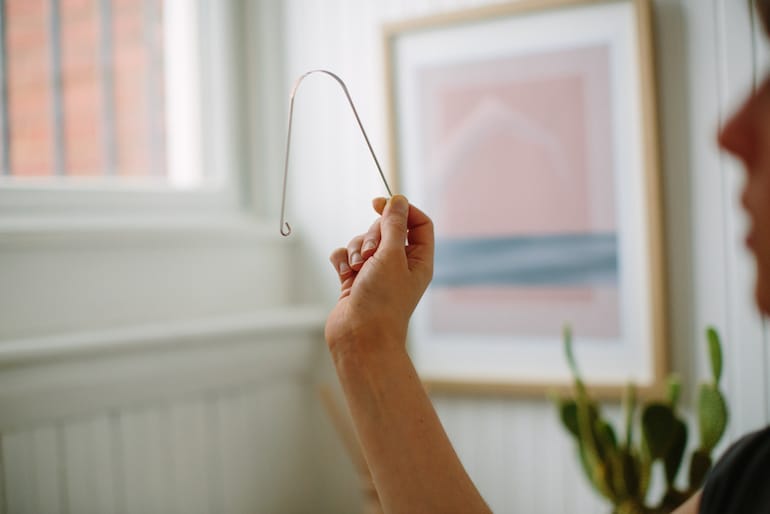 “Even after properly brushing and flossing, there will still be bacteria in your mouth,” says Whitney DiFoggio, a registered dental hygienist and founder of the YouTube channel Teeth Talk Girl. “This bacteria is found on the tongue due to trapped food debris between the tiny papillae, small, finger-like projections that cover the surface on your tongue.”

Papillae are known for harboring as much as 90 percent of the bacteria that causes bad breath, says DiFoggio.

If you deal with chronic halitosis or even occasional morning breath, tongue scraping is your new bestie. “There are numerous studies that show the common sources of bad breath are from bacteria and food debris around teeth, beneath gums, and in the crevices of the tongue,” says Dr. Salierno.

Tongue scraping is especially beneficial if you’ve been eating any smelly foods, like garlic, onions, or tuna, says DiFoggio.

“When used properly, tongue scraping might actually help your taste buds to work even better than before because germs won’t be covering them,” explains DiFoggio. A 2021 study found that there was a statistically significant improvement in taste function among 65 participants who used a tongue cleaner for 14-days.

“When your tongue isn’t coated with thick bacteria, your taste buds come into better contact with your food,” says DiFoggio. “You’ll enjoy richer tasting meals and all of the flavors that you couldn’t before. Removing layers of buildup across your tongue can make your palate more sensitive to the rich tastes of all your favorite dishes.”

“Healthy tongues have a nice pink color to them,” says DiFoggio. “However, if there are splotchy areas of white or brown or black across them, they aren’t just smelly — they can also be unattractive.” Having a clean-feeling tongue can help to boost your self-confidence, she says.

Tongue cleaning has roots in Ayurveda and is mentioned in Charaka Samhita, a medical text from ancient India that is still referred to by many today. A 2017 study evaluated the impact of tongue cleaning on digestion, which is believed to be a benefit in Ayurvedic medicine. The research found that after four weeks, participants did have improvements in constipation and overall oral health.

DiFoggio says tongue scraping can contribute to overall health by removing toxins from entering the body due to the removal of bacteria from the tongue. “Having a cleaner tongue means you’re not swallowing all those oral bacteria every time you eat or drink something. In turn, your GI tract and immune system will thank you.” 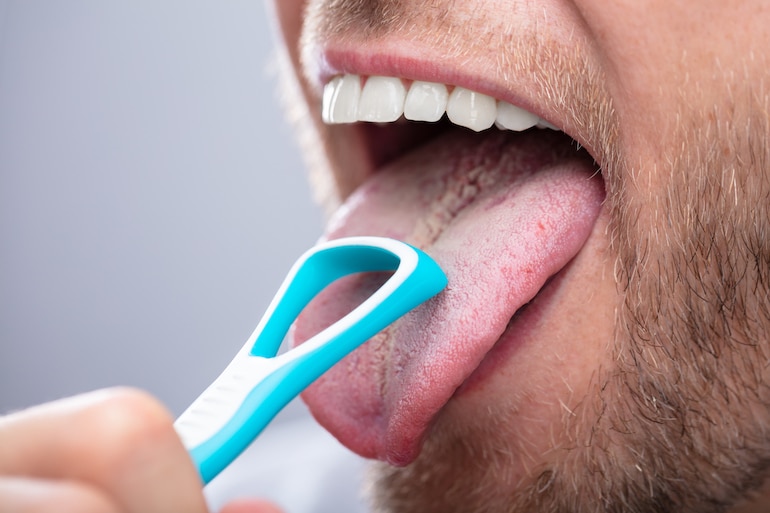 You might be wondering if you really need a special tongue cleaner when you could just use your toothbrush. “There are studies that show that a tongue scraper is more effective than a brush,” says Dr. Salierno. A review in General Dentistry of two different studies on using a tongue scraper versus brushing your tongue found that using a tongue cleaner or the tongue scraper produced a statistically significant difference in reducing levels of volatile sulfur compounds (VSCs) as compared to brushing your tongue with a toothbrush.

Another study found that tongue scraping reduced VSCs by 75 percent while brushing reduced them by 45 percent. But not all research has been so conclusive: A 2021 study found no difference in bad breath or tongue coating among those who used a scraper vs. a toothbrush.

Still, if you’re without a tongue scraper, brushing your tongue may provide some benefits over doing nothing at all.

Should You Use A Tongue Scraper?

Like brushing your teeth and flossing, tongue scraping is another great method for better oral hygiene. “Tongue scraping is a best practice for everyone, but it’s especially important for people who suffer from bad breath (halitosis),” says Dr. Salierno. “And if you use tobacco products, drink coffee, tea, or alcohol, or eat heavy-scented foods like onions and garlic, then the tongue scraper will help you recover your fresh breath,” he explains.

Dr. Salierno recommends a tongue scraper as part of your morning routine to fight off any morning breath. “Some extra tongue attention once or twice during the day can help more than a mint,” he says.

How to Use A Tongue Scraper

Place the scraper as far as you comfortably can and use gentle pressure to press down onto your tongue.

Gently but firmly scrape from back to front in one motion.  Move slowly to capture the tongue gunk.

Rinse away the debris with warm water and repeat a few more times. “Your focus should be on the top part of the tongue, which has the velvety appearance of bumps and grooves,” Dr. Salierno says. When you’re done, make be sure to rinse your scraper. If you want, you can also rinse it periodically with mouthwash.

Curious if tongue scraping can damage your taste buds? If used gently, you needn’t worry, says DiFoggio. “That said, if you are extremely aggressive, you could damage the soft tissue.”

My Tongue Scraping Results After 2 Weeks

After doing some initial research on tongue scraping, I was already convinced I would like this new practice. What’s not to love about fresh breath, better-tasting food, and an overall clean-feeling tongue.

I wanted a tongue scraper that looked cute so I’d be more likely to use it, so I got Tend’s Tidy Tongue, which is made of stainless steel and has nice grips.

My first reaction after my first tongue scrape was that my tongue felt, well, really clean. There was no weird residue and the garlicky, oniony taste from my meal that I can sometimes sense even after brushing my teeth was gone.

Where a thin film of whatever stuff on my tongue that I had deemed “normal” used to be, there was none. My tongue felt a little scratched—I may have gone too hard, but it wasn’t painful.

Over the next days of tongue scraping, I perfected the pressure needed and took the tip from Dr. Salierno to go over my tongue a few times instead of trying to scrape it all off in one fell swoop.

I tried to scrap my tongue both in the A.M. and P.M., usually before I brushed my teeth because, anecdotally, it made my mouth feel fresher than when I tried it after brushing.

Sometimes it felt more effective than others—I notice the biggest difference after eating something with onions, which I’m quite sensitive to, and first thing in the morning. With more frequent scraping, I could definitely tell my tongue was getting “cleaner” the more consistent I was. Honestly, it made tongue scraping less fun because there wasn’t as much gunk to look out for, but it was definitely doing its job.

Choosing the Best Tongue Cleaner for You 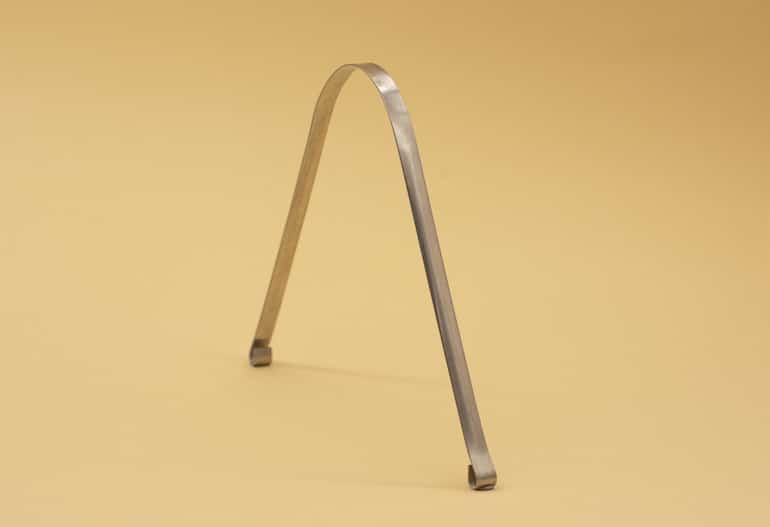 “The type of material doesn’t matter when using a tongue scraper,” says DiFoggio. It’s more important to choose the one you’ll most enjoy using, she explains. “If you like how it feels then you’ll tend to use it more.” That said, there are some reasons you may want to choose one type of tongue scraper over another.

Metal tongue scrapers can sometimes be dishwasher safe and won’t need to be replaced as often, says DiFoggio, which can also make it a more sustainable option.

Copper tongue cleaners are favored in Ayurvedic medicine. Copper is naturally anti-bacterial, but the downside is that copper can tarnish, so copper tongue scrapers require some maintenance to keep them shiny.

If you have a bad gag reflex, a flexible plastic tongue cleaner, like these from Supersmile, could be a good option for you. These tend to give you a little more control and feel less invasive than other models. The downside is that plastic tongue scrapers usually need to be replaced every three months.

If you have a particularly sensitive tongue and want something extra-gentle that’s a bit more effective than using your toothbrush, a tongue cleaner with silicone bristles, like DenTek’s Orabrush may be a good choice.

“My best advice is to always read the tongue scraper’s label instructions regarding proper cleaning and replacement,” says DiFoggio.

Tongue scraping is an easy way to upgrade your oral health and doesn’t have any downsides, so the dental experts we spoke with recommended it for most adults.

Overall, I really like the fresh feeling in my mouth after I use my tongue scraper and plan on keeping this in my routine.

Source: https://www.humnutrition.com/blog/benefits-of-tongue-scraping/
We use cookies to ensure that we give you the best experience on our website. If you continue to use this site we will assume that you are happy with it. Ok